For the fourth time since 2013, Rob Rice Homes, the area’s largest local builder, was recognized as the Best of South Sound Contractor in New Construction in an annual poll of The Olympian newspaper’s readers throughout the South Puget Sound. 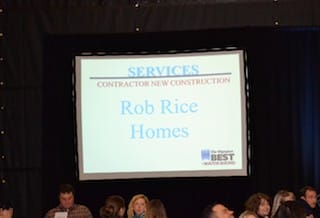 Rob Rice Homes received the Best of South Sound award at a recent event with 500 attendees.

In a recent awards ceremony hosted by the Thurston County Chamber of Commerce and The Olympian that drew a record-breaking crowd of nearly 500 attendees. Rob and Helena Rice, their building superintendents and several of their staff were present when the company was awarded the certificate.

About 66,000 total votes were cast in the overall poll this year with Rob Rice Homes receiving top honors in its Best of South Sound category.

The Olympian’s Karen McClennen, who emceed the awards presentation, noted the repeated wins for the local builder over the last four years. Each year’s recognition remains special for Rob Rice who has made it a point to attend the event annually.

“This means a lot to me because it is voted on by the community we serve and the people in the area my family and I call home,” said Rob. “Being a local builder and delivering top quality homes to grateful homebuyers is what we strive for.”

As the area’s largest and most experienced builder, Rob Rice has developed 43 new homes communities in the South Puget Sound since 1985. His communities include nearly 4000 new homes in Olympia, WA as well as in the nearby communities of Lacey and Tumwater and neighboring Pierce and King Counties. 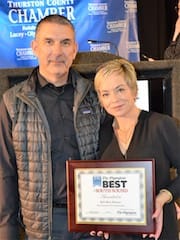 Now four-time winners, Rob and Helena Rice are grateful for the vote of confidence from their community.

For more than 30 years, whether building his first home or his latest, the respected builder has taken personal pride in his work and has stayed connected to his communities. Often seen walking through a home or driving through his neighborhoods to keep a watchful eye on building progress, his passion for excellence is matched by his care for the people that buy his homes.

“I enjoy driving through my communities—some built more than 25 years ago—because the landscaping has matured beautifully and the homes retain their beauty and value,” says the award recipient. “People tell me daily how much they enjoy the open space that I’ve developed. I have many families who are repeat Rob Rice Home buyers and that makes me feel accomplished and proud.”

A local builder, Rob’s office has been located in Olympia, just across the street from Ralph’s Thriftway, for many years.  A fixture on local non-profit boards and frequent contributor to many non-profit organizations, Rob and his wife Helena are embedded in the local community. 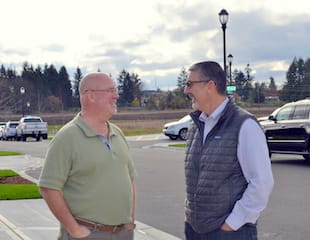 The local builder’s stellar reputation has attracted home buyers from across Washington State and the U.S., as well as internationally. Retired and active military personnel who want a home near Joint Base Lewis-McChord, are often thrilled to settle and feel at home in a Rob Rice Community.

All of his homeowners trust the superior construction, craftsmanship and attention to detail of the area’s largest local builder and his team of long-time, valued partners. They have come to understand and experience the company’s remarkable customer service.

They are the reasons that many homebuyers say they will only purchase a Rob Rice Home and why, once again, Rob Rice has been voted the Best of South Sound builder.