If you shopped at Cabela’s in Lacey, WA on December 7th this year, you probably couldn’t help but notice the enthusiastic Salvation Army bell ringers wearing holiday garb and offering season’s greetings and candy canes at the store entrance.

They were volunteers from Rob Rice Homes and the Epic Realty sales team that represents the builder in several of his new home communities in South Puget Sound. They were participating in Thurston County REALTORS Association (TCRA) Ring Day, something they have done for the last three years to help raise money for the less fortunate. 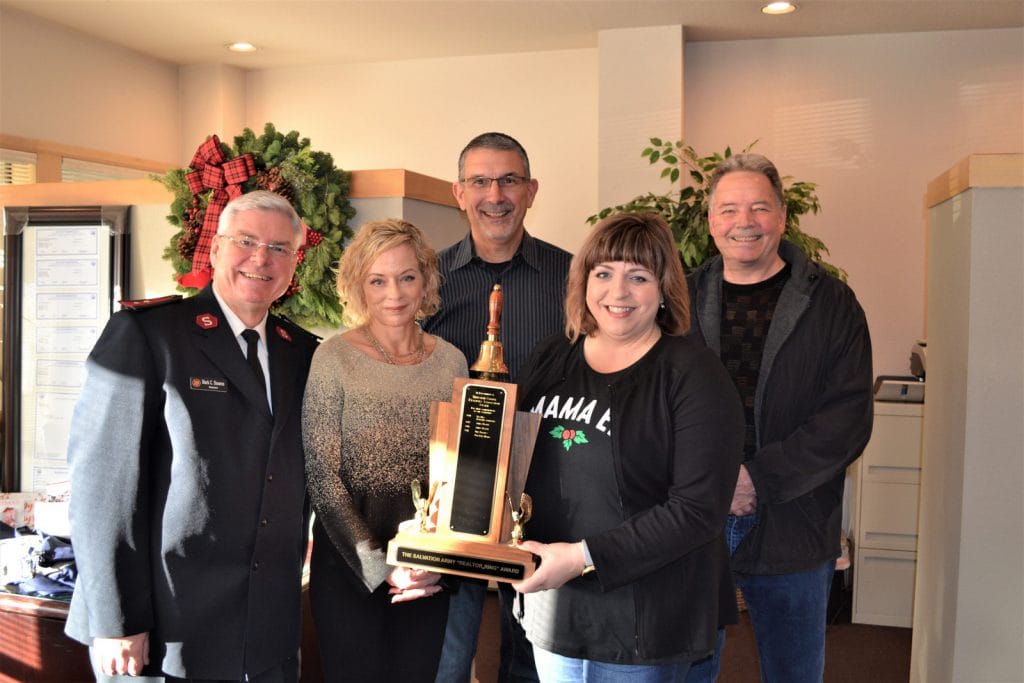 (L-R) Salvation Army Captain Mark Stearns, Helena Rice, Rob Rice, Christina Janis and Gregory Moe are pictured with the trophy for the most amount raised during the TCRA Ring Day.

This year, more than 100 TCRA members from 13 real estate offices rang bells at 13 locations throughout Thurston County during the day-long event to help fill the Salvation Army’s Red Kettles with the public’s generous donations.

“The first year we participated in Ring Day, we volunteered our time, taking shifts and ringing bells to help our REALTORS,” said Helena Rice, co-owner of Rob Rice Homes. “The last two years we have made it more of a company-wide focus to raise the most money we could. We invited our Rob Rice Homes building partners and sub-contractors to come out to our bell ringing location at Cabela’s and support the Salvation Army with their donations. This year, some of our construction team even came out to ring bells with us!’

As the area’s largest local home builder, Rob Rice Homes has been thrilled to support such a worthwhile effort. 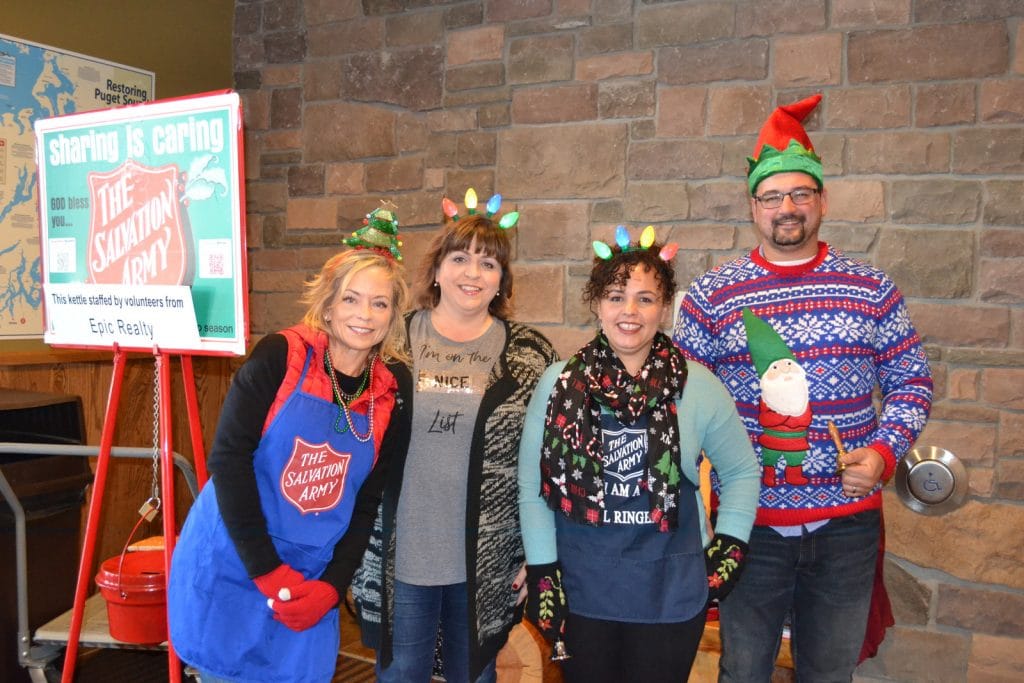 “The Salvation Army does amazing work and 100 percent of the money raised goes directly to those in need right here in Thurston County,” explained Helena. “That’s really important to Rob and me. We are a locally-owned business and feel strongly about helping our local Thurston County residents in need.”

To add to the fun of raising money for a great cause, there is a competition among the participating real estate offices to see who can raise the most money for the day. Last year, Epic Realty and Rob Rice Homes won the competition’s winning trophy.

Lots of Winners
Rob Rice Homes recently hosted a catered holiday breakfast at their office on State Ave in Olympia for all of their employees and REALTORS. The Rices had also extended a special invitation to the breakfast to the sub-contractors and partners that had contributed to their Ring Day fundraising efforts. At the gathering of about 50 guests, Helena expressed her gratitude and made an exciting announcement. 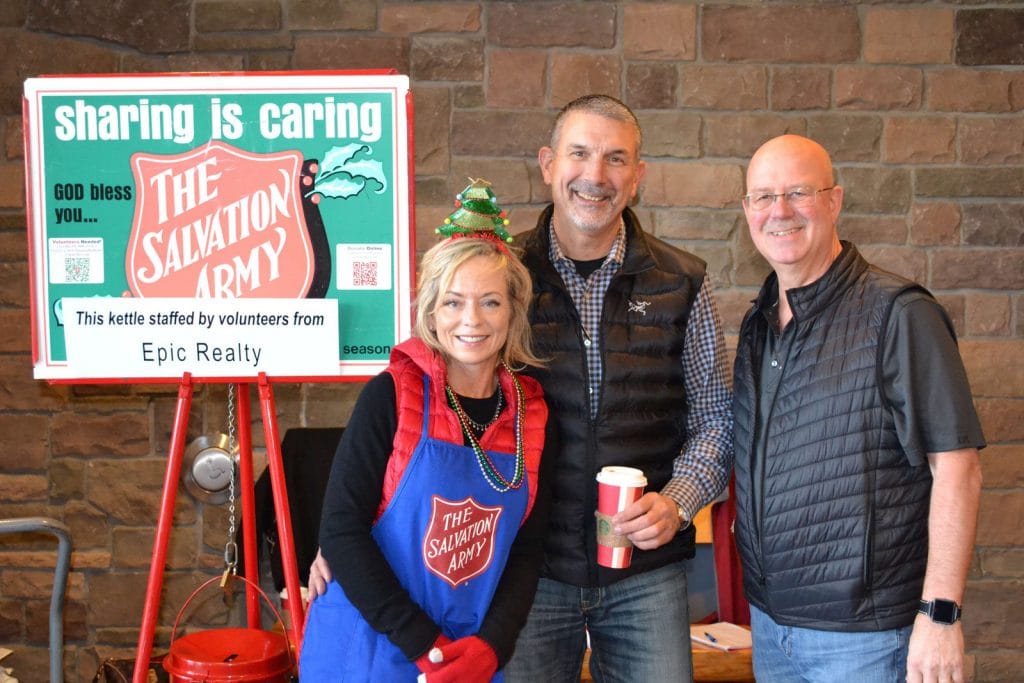 (L-R) Helena Rice, Rob Rice and Jeff Pantier of Hatton Godat Pantier, a long-time partner of Rob Rice Homes, was one of the many partners who supported the recent fundraising efforts.

“We wanted to sincerely thank all of you who donated your time or money to help us on Ring Day,” she said. “As a result of our efforts, this year we again won the competition for the most money raised!”

Helena also introduced Gregory Moe, a REALTOR with Windermere Real Estate/Olympia who has organized the Thurston County REALTORS Association Ring Day program since it began several years ago. Gregory has served on the Salvation Army-Olympia Corps Advisory Board for about nine years. He explained to the group many of the services the Salvation Army provides for those in need.

“We are all in the housing business,” Gregory said. “The Salvation Army helps the less fortunate with housing, food, bus vouchers, rental assistance, utility assistance and more. Our community kitchen serves between 12,000 to 13,000 meals a month. It is breakfast, lunch and dinner and we don’t turn anyone away and everything is donated. We have volunteer cooks, food prep and food donations.”

Gregory also announced the substantial amount that Epic Realty and Rob Rice Homes had helped raise during this year’s event. 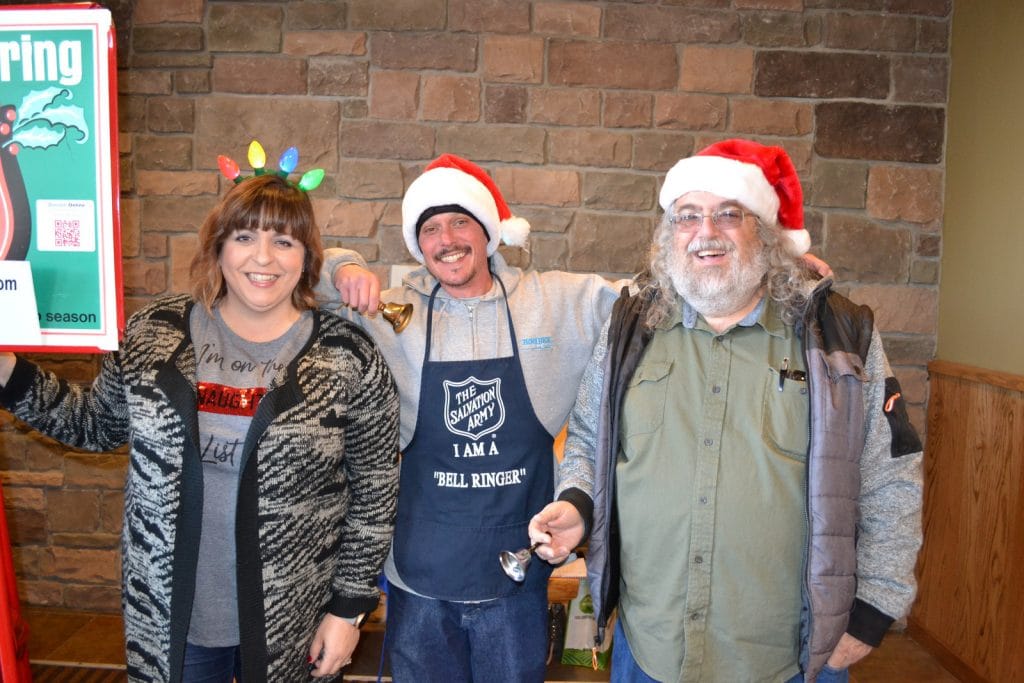 “You all really stepped up,” he said. “The amount of money raised in contributions from the bell ringing at Cabela’s was more than $6600.”  It was the most raised by a participating real estate office on the TCRA Ring Day.   “For eight hours of bell ringing, that is fantastic,” added Gregory.  And, an additional contribution came in later that raised your total to more than $8100!”

Captain Mark Stearns who leads the Salvation Army-Olympia Corps also expressed his heartfelt appreciation to the group. He explained how much the Salvation Army relies on donations from the community during its Red Kettle campaign.

“It’s what happens in this Kettle that tells us if we are able to make it another year and with Kettles like yours, we will make it another year. It is our single, biggest local fundraiser all year. And, all of it does stay right here in Thurston County to help Thurston County people. Thank you for all of those who receive the benefits who can’t be here to thank you personally. We house close to 100 people overnight who don’t have a house themselves. You help us help those people. Thank you.”

The grand total raised by all 13 real estate offices during Thurston County REALTORS Ring Day was more than $18,700, a record amount for the local trade Association’s annual event.

“We plan on participating in Ring Day every year on the first Friday of each December,” said Helena in her final remarks at the breakfast. “Come out there with us. It is such a great team effort and it is such a great cause. We cannot say enough good things about the work of the Salvation Army.”

Rob Rice is Thurston County’s largest local home builder and has been voted the Best of South Sound for the last five years. He has built more than 3000 homes in 43 different new home communities over more than 30 years. He and his wife Helena live in Olympia, WA with their two sons, Alex and Carson. Rob is a graduate of Washington State University with degrees in construction management and architecture.