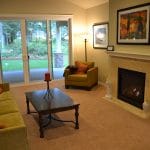 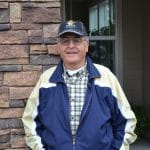 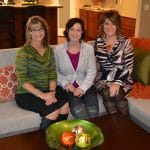 For three hours, a steady stream of real estate brokers stopped by for lunch, dropped off their business cards to win Seahawks tickets and other prizes and admired the luxury rambler in Campus Highlands known as the Vahalla.

Their next stop was for a dessert from Gotti Sweets at the neighboring community of Campus Peak where the newly-built Alder was on display for the first time. Rich with premium features, the homes at Campus Peak sit on rolling hills and have picturesque golf course and Northwest views.

“People often think they have to wait for a home like this,” says Jeanne Tranum, one of the Coldwell Banker Evergreen Olympic Realtors who represents Rob Rice Homes at Campus Peak. “Although they have many quality features and beautiful lots with lovely landscaping, the homes at Campus Peak are priced surprisingly within reach for those looking to move up from their first home.”

A Happy Homeowner Drops By

At the Vahalla, visitors arrived for lunch as the fireplace flickered in an open and light great room that looked out through a wall of windows onto a lush view of the neighboring golf course.

Not only did brokers marvel at the home that exuded warmth and luxury but a neighbor, Hans Ebke, stopped in and expressed praise for the home’s local builder.

Hans is the former owner of Liberty Bay Bakery in Poulsbo and had previously been a regional manager for Albertson’s store bakeries in several states. The event was just down the street from his Rob Rice Home where he and his wife Pat had moved just one month ago.

“We drove to this community for two years while waiting for our home to sell. It always looked clean and neat here and I knew it had a strong Homeowners’ Association,” said Hans who at 70 calls his new home his final one. “I watched as our house was built from the foundation up and I met every contractor.”

Hans explains that all of them had the highest respect for Rob Rice as a builder and worked hard to meet his high standards.

“Rob Rice doesn’t cut corners,” Hans said. “That’s reassuring to us because this was a big change in our lives and it is where we invested a lot of our resources.”

Hans marvels at the local builder’s customer service, too.

“Just the other day, I had a problem and I stopped Rob’s superintendent, George, as he drove by. He took care of it right away.”

“I am a tough customer,” Hans concludes. “I spent a half a million dollars and I am happy.”

Keith Taylor, Senior Vice President of Corporate Real Estate for Washington Federal, and several of his associates drove from Seattle for the Brokers’ Open and had much to say about the Meridian Campus Communities that Rob Rice has developed and built.

“Rob Rice is the definition of integrity,” said Keith. “We had invested about $43 million for this land in 2007. By 2009 with the economic downturn, its value had plummeted to $9 million. With Rob’s work developing and building homes in these communities, we anticipate the 750 new homeowners will have a cumulative market value of over $250 million”

Rob, who accompanied the bankers on the tour, adds how it helped the area. “We kept building during the downturn and it created a lot of jobs for our industry during a tough time.”

Keith stared out the back windows of the Alder at the lush view of the neighboring fairway. “These homes are gorgeous. We are so pleased.”

“I love selling Rob Rice Homes,” said Jeanne Tranum as she hosted the Alder for the event. “Buyers are surprised to find that the beautiful finishes, considered costly upgrades in most new homes, all come with the price of the home. These homes at Campus Peak will sell themselves.”

Jeanne also had high praise for the builder who backs his homes with quality service.

“As a local builder, you know where to find Rob Rice—his office is in town. He always comes back to check on his neighborhoods and you are assured your home is high quality; you know what you are going to get.”

Rob Rice is Thurston County’s largest local home builder and was voted the Best of South Sound for 2013. He has built more than 3000 homes over the last 30 years. He and his wife Helena live in Olympia with their two sons; Alex Michael and Carson. Rob is a graduate of Washington State University with degrees in construction management and architecture.