In Rob Rice Communities There Is Green, And Then There Is Lush Green

To Rob Rice being “green’ is not only about taking measures to protect the environment, it is also about doing it in a way that contributes to the beauty and value of his exceptional communities. 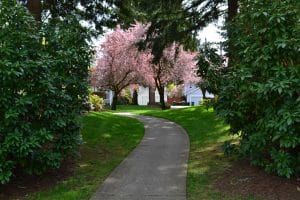 Drive through any Rob Rice Community, new or old, and you will be struck by the expansive landscaping and abundant green space throughout. Much of that landscaping adds to the aesthetic beauty of the neighborhoods while meeting state and local codes that protect our environment.

Part of those codes are the stormwater systems required in each development that naturally cleanse and filter run-off water before contaminants seep into our aquifers and water supply.

“It is a two stage process,” says Rob. “The first stage is a wet pond, which serves to remove pollutants—oils, metals and chemicals—that come from roads. The ponds have liners so either the contaminants settle or the natural wetland vegetation we plant helps remove them from the water. The cleaner water eventually flows to an open space and slowly filters through the soil to the water supply.”

But in Rob Rice Communities, the stormwater systems not only effectively protect our water, they are also unique park-like settings adding beautiful grassy knolls and lovely, naturally vegetated ponds to a neighborhood, attracting birds, ducks, geese, wildlife and the families that enjoy it all.

More Than a Hole in the Ground 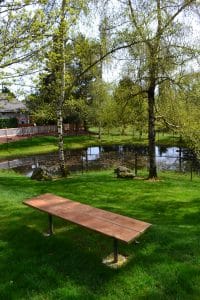 “Rob plans stormwater systems into the design of his communities, contouring them into the natural landscape,” says Jeff Pantier, a land development consultant from Hatton Godat Pantier who has helped Rob Rice with site development for nearly 30 years. “They are not just a place for scotch broom to grow, but a place where homeowners and their children can play soccer, have a picnic or throw a Frisbee.”

Rob Rice has long made the stormwater systems more than an afterthought.

“From the beginning, my philosophy on stormwater ponds has been to integrate them into a project and make them an asset,” says Rob who not only builds homes but develops the entire community. “In our communities they are front and center—not a hole in the ground hidden in the back corner of a plat.”

David Burns, retired principal planner for the City of Lacey, often used Rob’s unique approach to landscaping and planning as an example, especially his design of stormwater treatment ponds and systems.

“As a planner for the City of Lacey from 1986 to 2013 I had the opportunity to work with Gemini (now Rob Rice Homes) for more than 25 years,” says Burns. “One of the many things that set Rob Rice apart from other developers was landscaping as he went well beyond standard requirements setting the bar for new developments in the late 1980s and early 1990s.

“This was most noticeable in the naturalized treatment of drainage retention areas. Rob saw them as more than large holes to capture drainage,” Burns explains. “He envisioned them as a project amenity that looked like an attractive wetland open space.”

Because of Rob’s innovative treatment of stormwater drainage and landscaping Burns used his communities to pattern much of Lacey’s design standards.

“The subdivision of Beckonridge is a good example of Rob’s cutting edge work,” says the retired planner, who was once the lead on code development for the City of Lacey. “It is full of innovative concepts that Lacey used as a model to frame subdivision requirements from beautiful landscaping, to small lot concepts. This plat was also part of a short plat that consolidated open space and drainage requirements to provide a wonderful park that Lacey enjoys today— William A. Bush Park .” 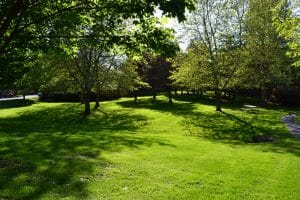 Rob finds it hard to conceive of just meeting the minimum environmental requirements for stormwater treatment when planning his communities.

“It is code-required but we don’t just look at code-minimum, we don’t even think that way,” says the local developer and builder. “Our storm ponds and filtration systems are meant to be a visual feature and a focal point so, many times, we are at least doubling what is required by making that pond a lovely green feature of the community.”

Pantier says a drive through any Rob Rice Community convinces people of the value of his thoughtful development.

“His communities have a timeless beauty, homes with lasting curb appeal and streetscapes that look better after 20 years than when they were first built. Rob puts so much into a community upfront, in its landscaping, its stormwater ponds, its trees and its plants to ensure a enduring beauty and value for its homeowners.”