For the Love of Dogs

There are many personal touches to Rob Rice Communities that truly matter to this local builder, who is known for the superior quality of his homes and beauty of his neighborhoods. 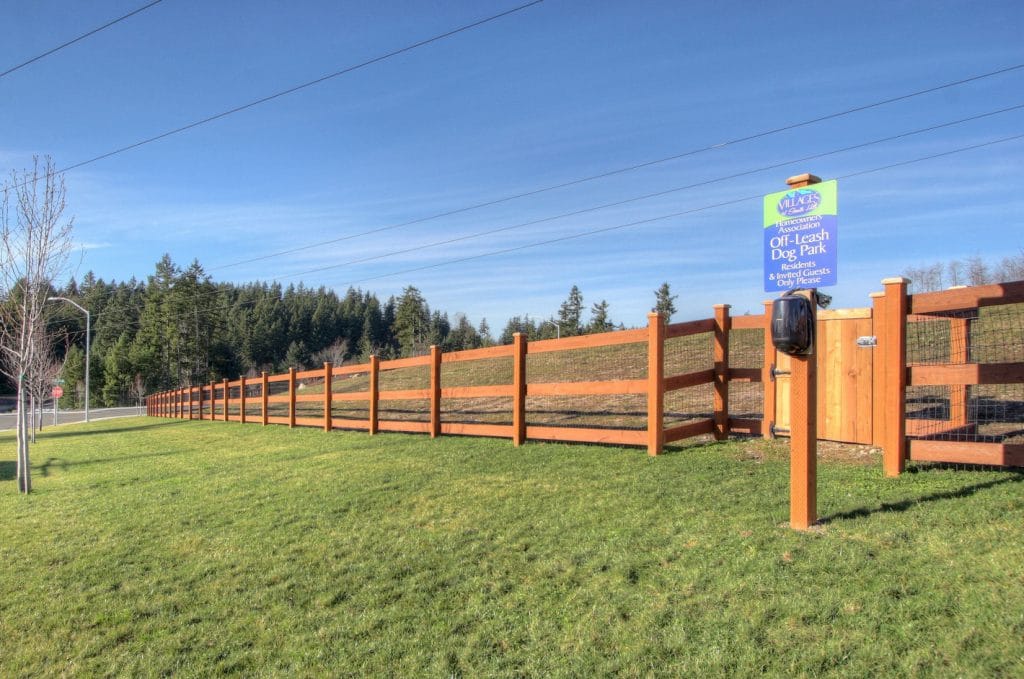 The off-leash dog park at Villages is a huge attraction for today’s homebuyers and their dogs.

One of those personal touches is the off-leash dog park at Villages of South Hill in Puyallup set aside for homeowners’ pets among the more than six acres of green space in this lovely community. The one-of-a-kind dog park is a huge attraction to many of today’s buyers.

To understand why, consider a recent survey by Harris Poll . It reported that 33 percent of millennial home buyers said space for their dog had influenced their decision to buy their first home.

“Rob put the dog park in at Villages for the social aspect it brings to a neighborhood,” said Helena Rice. “Rob has a great desire to create a sense of community and encourage neighbor interaction and the dog park does just that.”

Providing a neighborhood gathering place is just one of the inspirations for this rare and unique dog park in a Rob Rice community. The Best of South Sound builder and his family are avid dog lovers, too.

Homes to the Rescue

Rob and Helena and their sons, Alex and Carson have a fifth family member, their beloved dog “Rainier,” named after the road where the dog was rescued more than 10 years ago.

“I picked him up running down the middle of Rainier Road in East Olympia,” said Helena. “It was the best decision ever. I saw something special in him and knew I could rehab him. He is a great dog for our two boys. He comes and alerts me if our boys are fighting or someone is crying. I call him my ‘nanny’ dog.”

Rainier is an “only dog” but Helena said their family has previously owned three at a time and they hope to have more someday.

“Rob has a rule for me though,” said Helena laughing. “Any rescue has to be over 35 pounds… before I accessorize.”

Helena had three rescue dogs when she and Rob were married.

“Rob was living in a pet-free home when we met,” explained Helena. “But, within a few months, Rob was traveling around with one of our dogs, Bella Mae, even taking her to the office for the day.” 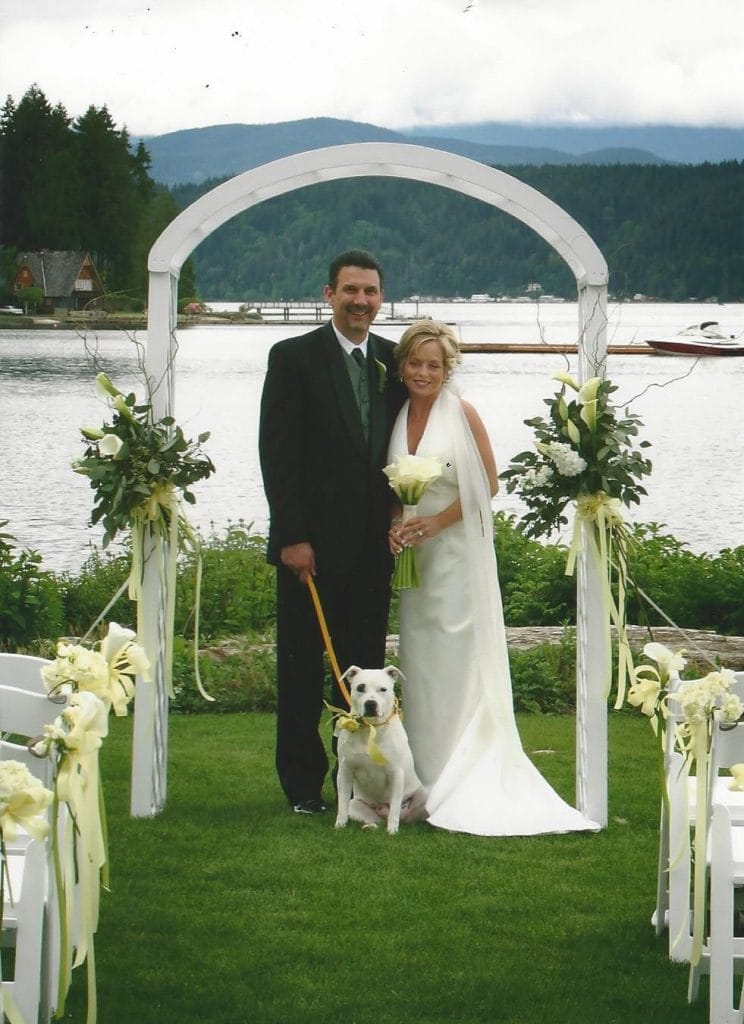 Bellamae, one of their rescue dogs at the time, was the couple’s ringbearer.

Bella Mae was a ringbearer in the Rice wedding and though she is no longer alive, she has a street named after her in the Rob Rice Community of Black Lake Palisades in Tumwater, WA.

Rob also stops to rescue strays, even picking them up in communities where he builds to make sure they get back home or to a shelter to be helped.

“A few years ago, Rob stopped on I-5 on the North Fork Lewis River Bridge where he saw a confused dog running in the freeway,” Helena said. “He crawled underneath a truck to get him, brought him home, took him to the vet and found ‘Lewis,’-named after the bridge where he was rescued-a great home with one of our staff.”

Every year, Rob and Helena sponsor a fundraising auction for Concern for Animals, a non-profit that assists low income families with care for their pets and rescue animals and a few years ago, Rob even donated the work for a full remodel of the organization’s office.

Rob and Helena love their rescues and are passionate about the benefits of adoption.

“We rescue because there are so many dogs in need. These days, there are even many full-bred dogs on Petfinder waiting for a good home.”

Gorgeous Home Choices for Everyone 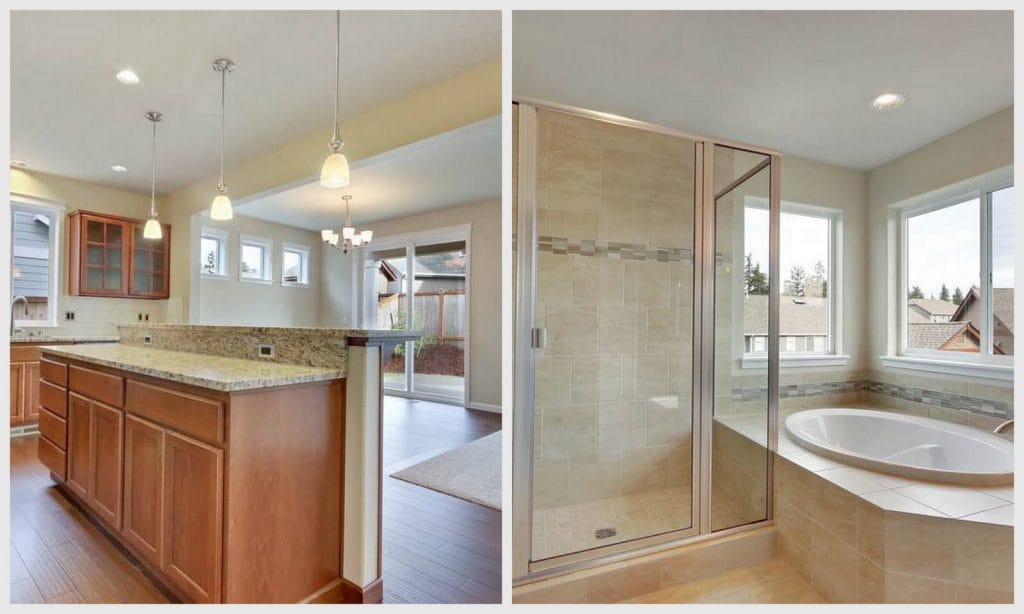 The luxurious and elegant Poplar is now move-in ready.

There are lots of good reasons why buyers (and their dogs!), love Villages of South Hill in Puyallup beyond its amazing open space and off-leash dog park.

The homes there have fulfilled the dreams of many families, retirees and military households with their gorgeous and well-thought-out floorplans, from spacious two-story models to several choices in luxury rambler and master down plans.

The elegant 5-bedroom Poplar (2692 sq. ft.) is move-in ready right now at 4025 23rd Street SE with luxurious features like a master bedroom with a view of Mount Rainier and an over-sized fully-tiled master shower. The Aspen (2492 sq. ft.), offering a main-floor master suite and an abundance of storage, is also ready and available at 2351 40th Ave SE.

And, don’t let you or your dog miss out on the six homes currently under construction. Timing is just right on some of these homes under construction to choose your interior surfaces selections for flooring, countertops, tile and more.

Rob Rice Homes are loaded with premium features like quartz or granite counters, hardwood flooring and unique designer touches in backsplash tile, gracious lighting fixtures, rich wood and soft-close cabinetry that are all included in the price of the home.

This community is ideally located near parks and trails, shopping and health centers. There is quick access to Highway 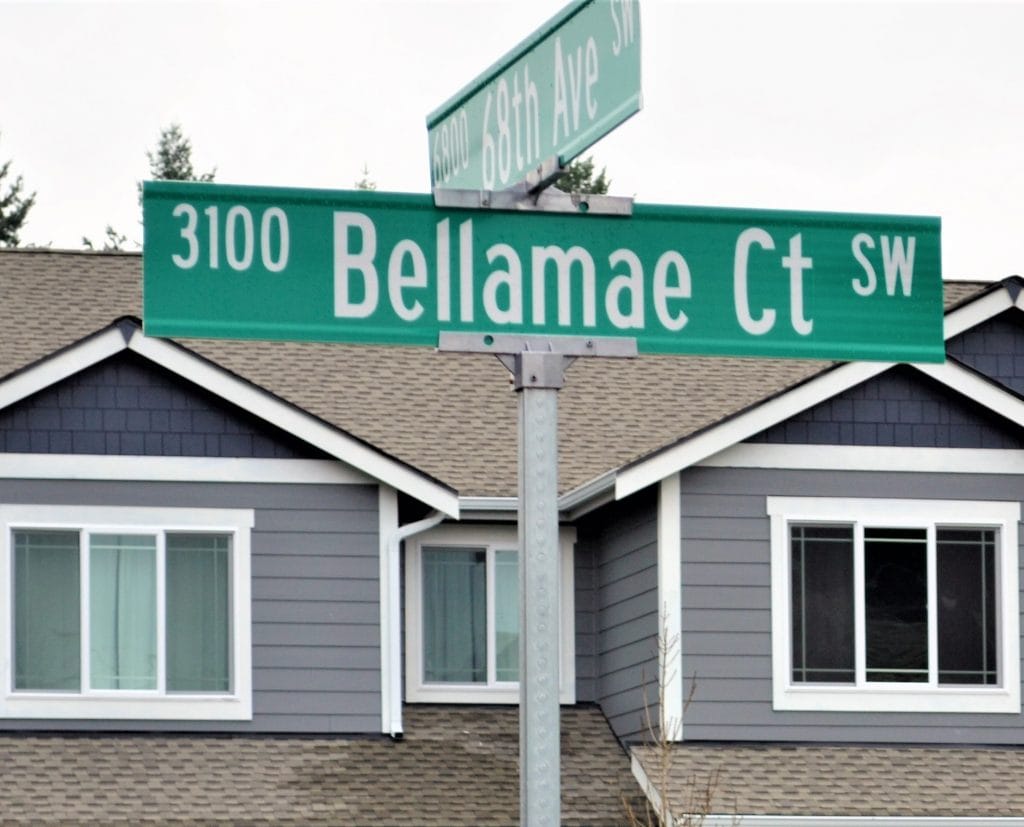 A street at the Rob Rice Community of Black Lake Palisades is named after Bellamae.

512 and Interstate 5 and it is minutes to the Sounder train. The location is so convenient that Seattle buyers have made Villages of South Hill their home.

And, for the many buyers who, like the Rices, make their four-legged best friends a priority, the off-leash park provides a rare opportunity for you and you dog, in a terrific community with superior-built homes at Villages of South Hill in Puyallup.

Rob Rice is a large local builder who has been voted the Best of South Sound for the last four years. His entry in Olympia Master Builders Tour of Homes won “Best of Show”. He has built nearly 3000 homes in 43 different new home communities over more than 30 years.

Rob and his wife Helena live in Olympia with their two sons, Alex and Carson. Rob is a graduate of Washington State University with degrees in construction management and architecture.