Rob Rice Homes was recently recognized as the 2014 Best of South Sound Contractor for New Construction, a distinction made by voters throughout our communities and region. 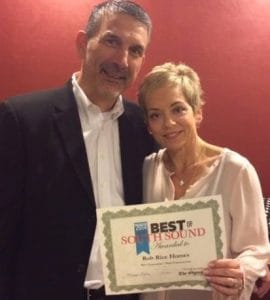 Rob and Helena Rice received top honors from the community where they build superior homes.

This is the second year in a row the local new home builder has received the award and he was honored again at a public ceremony for the Best of South Sound winners co-hosted by the Thurston County Chamber of Commerce and The Olympian newspaper. This year’s event was bigger than ever, attracting nearly 400, a record attendance.

For the past decade, the Olympian has presented Thurston County businesses with the coveted Best of South Sound award. This year, their readers voted online from January 10 to February 15, 2015 for their favorite business in more than 80 categories. Rob Rice Homes won top honors out of 48 total nominations in the category.

“This is a wonderful place and we are committed to building the best quality homes for our communities,” says Rob Rice, who attended the event with his wife and staff members. “We have a great team of people—experienced building superintendents, top quality sub-contractors and partners, knowledgeable Realtors and of course our staff—all committed to our standards of excellence. To be recognized in this way by the voters across our County is gratifying.” 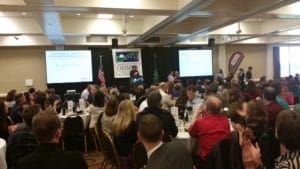 The awards ceremony that recognized Rob Rice Homes drew its highest attendance in the history of the award.

Rob Rice has distinguished himself as a local developer of 20 outstanding, highly-desired communities and more than 3000 quality-built homes since he started in 1985. Whether the first house or the 3,000th home, he puts the same care and attention to detail into each roof he raises over a Thurston County family. Throughout the area, Rob Rice Homes is known for its consistent superior construction, expansive landscaping and green space and long-lasting home values.

Local homeowners responded enthusiastically to the news of the award. “I love my Rob Rice home,” said Cynthia Navarro Jordan, who recently bought a Rob Rice home in Rainer Park where home values have increased over time. “Built over 20 years ago – it is new to me and just perfect!”

Rob’s office has been in downtown Olympia, just across the street from Ralph’s Thriftway for many years. A fixture on local non-profit boards and frequent donor to many non-profit organizations, Rob and his wife Helena are a big part of the community that has again honored their work.